Very rare for Beautiful Basements, but this basement was designed with no internal waterproofing, instead it would have both an external and an integral waterproofing system.

For the external waterproofing to be effective, during the application period the site and all surfaces had to be meticulously clean, a great challenge on a building site. 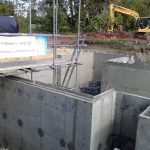 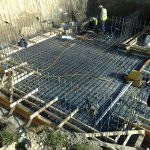 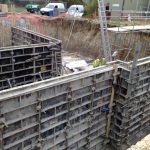 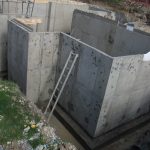 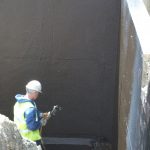 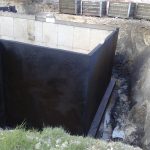 Once the old house had been demolished, the site stripped, and the excavation complete Beautiful Basements began the build.

An internal foul sump was installed and then the whole of the excavation was covered in a 70mm layer of “blinding” concrete. On top of this a waterproofing layer was laid and the slab set out and steel was constructed. Prior to the pouring of the concrete, everything that was to protrude through the concrete (foul pipes etc) had an expanding water stop applied to it to ensure no water could track up the joint.

The main concrete slab was then cast with a kicker in place and was done using a waterproofing additive mixing within the concrete.

The walls were then constructed with reinforcing and waterproof concrete. Finally, the ground floor was installed, using large concrete planks.

Type A Barrier Protection – A flexible bituminous tanking was sprayed on the external walls. Two coats were installed with a fibreglass mesh embedded between to give extra strength. This spray layer was linked to the waterproof matting laid under the main concrete floor slab.

Type B Integral Protection – The concrete within the walls and floor had an additive that reduces cracking and creates waterproof concrete.